Talk & Discussion “How to build a great creative community: from university friends to a global invention network”

Dr. Eric J Wilhelm
Founder of Instructables, Squid Labs, Makani and OptiOpia. Ph.D. in Mechanical Engineering from MIT.
Eric is an engineer, investor, and successful entrepreneur who has sold companies to Autodesk and Google. He is the founder of Instructables.com; a board of directors member of Datatrak (DTRK); and previously made design and manufacturing software as a vice president at Autodesk. Eric is now CEO of SafeConnect Solar, which is building an automated safety inspector for residential solar.
Eric holds a Ph.D. from MIT in Mechanical Engineering as well as an SB, and SM degrees in mechanical engineering from MIT, where he developed methods to print electronics and micro-electromechanical systems using nanoparticles. Eric has been recognised as one of the top innovators under 35 years old by Technology Review and was awarded the National Inventors Hall of Fame Collegiate Inventors Award for the development of a printing technique used to create patterns in films of nanoparticles or polymers with resolutions reaching into the 10’s of nanometers. He lives in the San Francisco Bay Area and can almost escape the jiu-jitsu choke holds of his two young children.

Lecture Abstract
Instructables is one of the internet’s most successful invention and DIYer community. You can learn woodwork, electronics, cooking, DIY biology, product design, space technology, any craft and so much more. The co-founder Eric J. Wilhelm (MIT Ph.D. in Mechanical Engineering) is coming to HKU to share his experience building a global, inclusive creative community. The event format will be of a discussion, like an interview in which Eric J. Wilhelm will talk about the history of Instructables.com, how it came to be, from friendship at University to a startup, to being acquired by a large corporation while keeping true to its vision and mission. Broader questions attuning to the Fourth Industrial Revolution and the transition of leadership between the USA and Asia on the matter of Innovation will be raised. Inventions have improved the human condition and also damaged the environment to the point of changing the climate and precipitating the 6th Great Extinction. How science and technology can be leveraged to address the problems it has created will also be raised. This event promises to be gripping for students and anyone interested in creativity, community, education, entrepreneurship and how technology and science can change be a force of change.
Eric new venture: https://www.safeconnectsolar.com/

MakerBay:
>> What are you up these days?
_ Eric: Started Instructables
Headed Fusion 360 for a couple of years
Residential Solar -> make it cheaper in the USA, make it like appliances (instead of a construction project). Now it’s 3x more expensive. Prototype phase. Dealing with regulatory hurdles.
_ Christy: Data, data privacy
TinkerCAD, tutorials
Legal
Idea, strategy role at Autodesk
Products from product to product
CAD -> REVIT
It’s hard to integrate multiple companies

>> What is Instructables today and how different is your original vision and what it is today?
_Eric: I finished studies. Took kitesurfing. Made my gear. The gear was expensive. 50% success, 50% failed. I documented on my website in HTML. I wanted to make it easier. People keep asking me to get my CAD files. We needed to have a platform to share.
Documentation engine.
It was to solve a personal need – rather than thinking of something long term.
We were asking ourselves many questions:
– Should we be selling kits?
– Is it about connecting people?
The easiest way was to run ads and just build it like that. Now it’s part of a bigger group.
Showing people that they can create things.
We got lucky to join the Education group in Autodesk.
It was successful and survived because it was not acquired by a media company at the time.

>>What is the role of Eric, Christy & the kids?
_ Christy: everything but code. Instructables.
The kids under 13 cannot have data online.
For kids on Instructables, get the parents to manage the account.

>> What are the challenges in setting up an online community?
_ Christy: this is a place where we want to hang out.
We have to be extra intentional because it can be an anonymous place.
We have a “Be nice policy” – if you’re not, we’ll remove your comment and kick you out.
Admin accounts are not seen as admin – they are community profiles.
So the community self-regulate.
Geeks like to game systems.
The system evolved. Kathy Sierra is awesome at explaining how to moderate a community positively.
Badass: Making Users Awesome by Kathy Sierra at Mind the Product San Francisco
https://www.youtube.com/watch?v=r4dNaflEgP4
Our efforts to moderate and create a safe community are scalable – in such ways that facebook and twitter could also moderate – if they wanted to.
We never edit (so we don’t own)
Showing the messy parts – not just perfection helps build a better story. People want to see the story behind the project.
_ Chicky: People want to see the journey.
_ Christy: You appreciate and value the work more when you see the hard work that’s gone into the project

>>Michael: Television was supposed to bring education. It’s not only doing that but a lot of bad stuff associated with capitalism.
_ Christy: Instructables was acquired not by a media company (Autodesk) but at the origin was helped by O’Reilly and Omidyar.
_Eric: We want to make a positive contribution to the world, do something meaningful, fun, so we make these choices.
_ Christy: A lot of Instructables for young people are learning how to do dangerous things safely, understand the limits. Some things need to be done by professionals.
_ Eric: Scale is important. Instructables is modest. Facebook is huge. The way they operate and the way they are moderated is not linear.
_Christy: There is no “maker revolution”
There is a democratization of information
The skills are still basic. After the great depression, they could fix anything.
It is a return of interest to skills that are classic.
Tools are cheaper. Information travels faster, cheaper.
When people say “Maker” they often mean “I got a 3D printer”
It’s just a generation that got skipped in the USA.

>> David: But the grandparents did out of necessity – now people do it for fun?
_ Christy: Our original core was geeks, now it’s everybody and early internet adopters.
We see young and older.
Parents with science projects

>> MakerBay The USA is kind of losing its leadership in combating global warming, and China is constantly lowering the cost of renewables. What do you think about that?
_ Eric: We have to address energy in a big way.
The middle class is not addressing climate change
40% Hawaii has solar on their roofs – for economic. 7 to 10 years of payback.
People have to build a spreadsheet – that’s too late.
Let’s make it under 5 years to get mass adoption
We need to recruit the mass population

>> Cesar: What about Puerto Rico, Tesla solar roof, Saul Griffith World War Zero on climate change.., what do you make of that?
_ Eric: Tesla roof is good looking, but I want more people to adopt, make it the IKEA / home depot
Pirate install in the new year, 500 next year
At mid-day electricity can be free in California.
Our system would have batteries
Panels are made in China. Because of tariffs they might be manufactured in Florida. We use off the shelf parts.
Our system would provide 1.6$ /Watt (current 3.5$ / Watt in the USA)
The tougher technology is the automated safety inspector
Right now in the USA, Eric
cost of hardware = 10% , The rest is labor, permit, installation
We are stuck in a contractor mindset, we want to be an appliance maker.

>> MakerBay: What’re the roles of makers in regards to global warming?
_ Eric: A lot of tinkering needs to happen
We don’t have the solutions
Transportation is a very big one
High-density battery

>> David: Who’s leading in the energy race?
Eric_ I don’t think about that

>> Chicky: How do you see Instructables in education?
_ Christy: Yes, in the classroom.
Tinkercad is doing well. Azerbaijan is doing well there! Recently we got a spike there as one of us got there.
Content needs to be age-appropriate, and have cool stories.
The age we’re interested in is TinkerCAD age. That’s a huge market and impact there
Some professionals use Tinkercad for sketching. When they are ready, they can transition to Fusion360.

>> Chicky: What’s the connection between Classic skills and innovation?
_Christy: Many projects, people take inspiration but do what they want to do
It is a source of inspiration. Reconnect to hobbies.

>> Kamakshi: What do you do in your leisure time?
_Christy: Cooking, Write comic/colouring books, Grow fruits trees

Thank you so much Eric, Christy, the kids for your patience!!! It was amazing to have you at MakerBay!

Original article: https://cesarjungharada.com/log-1/log/open-hardware-documentation-amp-collaboration I am always looking for the optimal platform to develop open hardware projects, there are some good platforms out there, but which one… 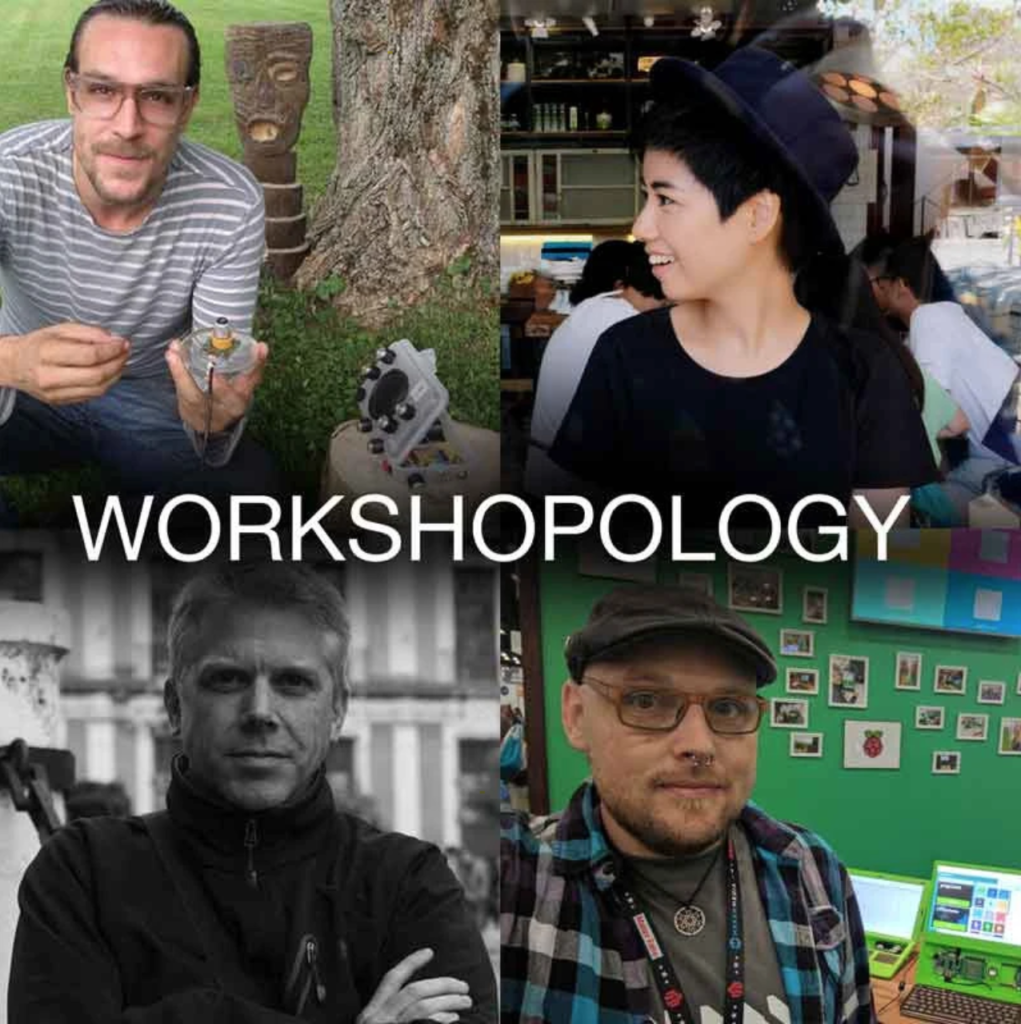