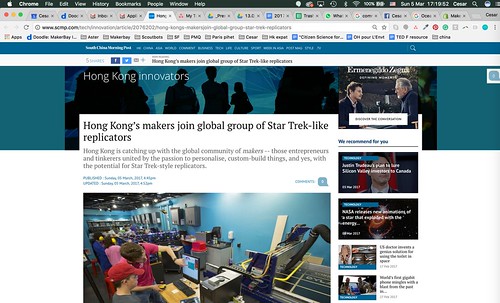 Hong Kong’s makers join global group of Star Trek-like replicators Hong Kong is catching up with the global community of makers — those entrepreneurs and tinkerers united by the passion to personalize, custom-build things, and yes, with the potential for Star Trek-style replicators. On Tai Nan Street in the

On Tai Nan Street in the Hong Kong is catching up with the global community of makers — those entrepreneurs and tinkerers united by the passion to personalise, custom-build things, and yes, with the potential for Star Trek-style replicators. On Tai Nan Street in the working class district of Sham Shui Po, you’ll find Common Room, a small shop with the look of a trendy coffee bar. Common Room does serve coffee, but it’s also equipped with laser cutters, a 3D printer and all the tools and computer design equipment needed to make your own artisan items. Common Room is a so-called maker space, containing all that’s needed for inventors and designers to come up with their own unique products. The maker movement is the collection of entrepreneurs, builders, spaces and equipment around the world, united by the common passion to personalize and create new things. Common Room’s founder Keith Lam wants his maker space to complement the neighborhood and its array of old-school customization shops.

To the untrained eye, Common Room — or other maker spaces in Hong Kong — wouldn’t seem like the starting points of a new world order in the economics of production. But in the eyes of Dr Neil Gershenfeld, Massachusetts Institute of Technology physics professor and founder of the Centre for Bits & Atoms (CBA), this and other maker spaces around the world herald a new, more personalized economy. Gershenfeld, whom the New York Times dubbed “the intellectual godfather of the maker movement”, is known to readers of Wired or MIT Technology Review, and a regular of TED talks. A discussion about the future of production with Gershenfeld can span the Italian Renaissance to a not-too-distant future, in which Star Trek-style replicators can conjure up virtually any product you ask of it. “3D printing can be as expressive as painting”, Gershenfeld said.

CBA is working on astounding technology, often with large corporations eager to find their place in the world 10 or 20 years from now. Among them are Philips, Toyota and most recently, Airbus. Gershenfeld is working on a new way of building aircraft where the materials can be programmed, like DNA, in order to build things that effectively build themselves. The result could be wings that flex and twist their shape, without the need for moving parts, hinges or levers. From the creative handyman to the adventurous SME (small and medium-sized enterprise), the creators of all kinds have a new tool to transform their good ideas into real objects: Fab Labs, high-tech and collaborative workshops, start to blossom in France.

Hong Kong’s maker movement is still in its infancy. But the local maker movement is full of passionate innovators and entrepreneurs like Cesar Harada, who arrived in Hong Kong a few years ago. He has two maker spaces in Hong Kong under the name MakerBay. His main location is in the old industrial area of Yau Tong, across the street from Wheelock Properties’ latest luxury residential project, Peninsula East. The other is a smaller location at the fashionable PMQ on Aberdeen Street. Harada is ambitious, soft spoken, and a hardline independent. He has a project five years in the making – a sailboat with a hull that flexes with the waves. Though untested, Harada reckons such a boat will be more efficient in the water, and thus save on fuel. “Things like these are worth dedicating your life to,” Harada said.

He’s not alone in his effort to build up the maker movement in Hong Kong. Brian Tang, a former IPO lawyer at Credit Suisse, has quietly worked to build up a maker culture among Hong Kong’s schools. Tang’s IPO work got him thinking about innovation, and he realized there wasn’t anything to encourage it in Hong Kong schools for his children. He organized a youth-oriented maker event, with 15 kids and a 3D printer in 2014. In 2015, he held events at City University, Cocoon, Cyberport, and Harada’s MakerBay. “Without these skills, we are not preparing our kids for the future,” Tang says.

(This is the excerpt of an article published in the March issue of The Peak magazine, available by invitation and at selected book stands.)

While most people would not bother to take action when it comes to environmental protection and recycling, KaCaMa Design Lab, being dedicated to sustainable design,…